Slop Spawners are a type of Blotling enemy from Epic Mickey: Restored Edition that act as minibosses. They are first introduced in Underland where one appears in The Red Queen's Gardens before Mickey reaches The Red Queen.

Sloplets are small Blotlings created by Slop Spawners. They are round leech-like creatures with one large green eye similar to Seers.

When a Slop Spawner sees Mickey, it will move around trying to hit Mickey with a one of its legs. It is completely impervious to any of Mickey basic or brush attacks. It will eventually spit out a few Sloplets which will hop towards Mickey, attempting to latch on and suck his life. Mickey can either paint or thin the Sloplets which will cause them to go into a dormant state with their eye closed. After a while, the Slop Spawner will plant its back two legs into the ground and attempt to inhale Mickey and swipe at him with its front two legs when close enough. During this time, the Slop Spawner will also inhale and swallow any Sloplets close by. If it inhales five painted Sloplets then the Slop Spawner will be redeemed but if it inhales 5 thinned Sloplets then it will be defeated and completely melt into the ground. 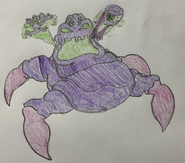 First concept art of a Slop Spawner spitting out a Seer and a Spatter.